Education should teach, but more than that, it should challenge us to think and grow. Our three changemakers shared where they see the need for education to change in order to better prepare our industries for the challenges ahead.

One changemaker spoke about the need to break out of traditional approaches to design and industrial construction, especially in the education space. Another told us that facilitating meaningful change with diversity, equity, and inclusion means embedding it in our education systems. The third spoke about how the growing demand for sustainable buildings will require teaching to transform.

To be prepared for the short-term needs of projects and the long-term hopes for industry, it’s clear the education of the next generation needs to evolve.

Victoria Bergsagel is out to bridge a gap that exists between education and architecture. “We know how people operate. We know how they learn. We need to change the ways in which we design spaces for people to learn,” says the President of Architects of Achievement.

For education, the main issue is how little has changed in the design of education spaces over decades, says Bergsagel.

“In the school world, we fall prey to nostalgia gravity and that gravity pulls us back to a nostalgic notion of what school used to be,” she says. “We just kind of ignore the research and we don’t change in ways that perhaps we should.”

So how can industry professionals break out of that trap? “We fall prey to nostalgia gravity and that gravity pulls us back to a nostalgic notion of what school used to be.” Bergsagel recommends starting a project kickoff with a reflection about each person’s most powerful learning experience. She will ask: what were the attributes of that experience that made it so powerful. “Usually people will say it was relational and that someone cared about them. Often there was risk involved, a fear of failure, an authentic project, a sense of community, recognition of success, or the guidance of a mentor,” she says.

Once the idea of risk arises, she’ll ask the group what risks they’re willing to take on the project. That, in turn, allows Bergsagel to challenge old approaches to designing and building educational spaces. “If you already think you know how to do this over here, should you do it that way all the time? What risks will you take on this particular project?” she’ll often ask a team. “How can we be more courageous?”

With patterns of inertia addressed, Bergsagel also focuses on designing to support and honor the culture of the people inhabiting the space. That’s often about facilitating greater interaction.

“I think we often don’t allow space for people to really get to know one another, for people to talk with one another. I think we don’t recognize as often as we should, or celebrate as frequently as we could, the relationships that people have, the synergies that can be fostered, and the strengths we all bring to the table,” she says.

Being able to share perspectives in spaces allows for richer conversations and better results. “My grandma used to say: ‘What you see depends on where you sit.’”

In other words, providing the right space allows for perspective and collaboration where small groups can gather, people are more engaged and can connect over ideas as they learn with and from one anothe

Higher-ed spaces should be designed based on how people learn best. Let research guide the way rather than building the way it’s always been done. Consider engaging more stakeholders with different perspectives when designing higher-education space. Diversity, Equity, and Inclusion in Design Begins with Education

“If you want to see change, you need to be the change,” says Christine Peter, Principal, Kaleidoscope Concept and Vice President of EDI (equity, diversity and inclusion) for the International Interior Design Association (IIDA) in Southern California. Peter also sits on the IIDA’s Equity Council at the organization’s headquarters.

“We decided that we wanted to go out to our members and ask them: ‘What were the changes they needed to see in our industry to make things happen?’ That’s how we really started the whole EDI movement within our Southern California chapter,” she says.

Increasing diversity in the design industry was one of the most mentioned changes from the members. Unlike other male-dominated businesses, interior design is often made up of women-owned companies, with little to no male presence and less diversity, Peter says. “We wanted to see that makeup change.”

One of the best ways to make change, Peter says, is through education and mentorships. Not simply at the high-school level where kids already have their sights set on college, but also starting as young as Kindergarten.

“It was an epiphany to me that the IIDA is a conduit for all those types of things to be able to happen, and people look to the IIDA to be that resource or a bridge to that information,” she says.

Another way Peter spearheads EDI change is by sitting on an advisory board at a community college.

In this capacity, she reviews courses that are being taught for the design department. As courses are evaluated and changed to meet new demands, designers are learning the updated approaches and methods through continuing education. Colleges that don’t have advisory boards should consider them, she says.

“They should look at having one that will evaluate, and continue to evaluate, the course offering for the design department,” she says, adding that technology and EDI approaches should be evaluated too.

The push toward EDI has also helped in her discussions with clients, as many are incorporating EDI into their designs and projects. Designing spaces so that everybody feels welcome is what a lot of these design spaces and clients are asking for.

“Designing spaces so that everybody feels welcome is what a lot of these design spaces and clients are asking for. Being able to think outside the box in that way is more about designing for the community with which you’re serving,” she adds.

Higher-education has a lot to offer those in A+D seeking a more diverse, equitable, and inclusive industry culture. Leaders can mentor young people entering the workforce. Learning organizations should seek advisors to ensure they’re providing both space and education that facilitates DEI objectives. And it’s an urgent need.

The U.S. green building market is expected to reach more than $103 billion by 2023, according to recent studies, and the global green-building materials market is expected to hit $433 billion by 2024. While many professionals focus on building energy efficiency to reach targets, there is opportunity to unlock more sustainable options by looking at changes to the interior built environment.

“If we want to move forward and save the planet, we have to teach differently so we can build differently,” she says. “We’re not going to solve tomorrow’s problems by teaching yesterday’s methods.”

This has significant implications for education and new professionals but also for working architects and designers. They need to move away from more conventional approaches to meet the demands of sustainable building projects. Manufactured construction approaches let us shift away from the build, demolish, and dispose cycles towards a circular solution that can be continuously re-imagined. “We’re seeing much greater pressure in the construction industry to solve its biggest challenges. It’s clear radical adaptation is required for the future of the industry.”

“If you’ve got somebody that’s planning a building with fixed interior architecture, what are they ultimately giving owners at the end? Is it a high-performance building with connected infrastructure? Because owners have to live with these buildings for years and years,” says Morgan.

Balancing sustainability needs with other project pressures — such as supply chain challenges, labor disruptions, cost increases, and overruns — requires more independent thinking and perspectives than in the past when process and precedent drove most of the decision-making.

“Taking a more holistic and community-based approach allows us to build more sustainably and move towards a more equitable and diverse learning environment,” she says. “This is already generating some amazing problem solving and really creative built environments, but these are far from the norm. We don’t demand that our interior architecture be as fluid and functional as the furnishings.”

Morgan believes a useful analog for the change we’re all living through in the industry is the past shift to LEED-certified buildings. “When LEED first came out, it felt like a basic LEED certification was an expensive bar to achieve. But today, most architects and designers are delivering platinum-level LEED performance projects without even being asked. That approach has been baked in. Eventually, high-performance connected buildings are going to be baked into the industry too.”

It’s important, now more than ever, that higher-education facilities teach the next generation of design and construction professionals more than conventional construction approaches, as sustainable building practices will have a far greater impact on health, wellness, and the longevity of the planet.

Dive deeper and hear more from Heather Morgan in this article: 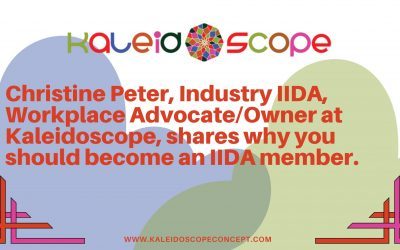 Why you should become an IIDA member – Christine Peter, Industry IIDA, Workplace Advocate/Founder at Kaleidoscope

Christine Peter, Industry IIDA, Workplace Advocate/Owner at Kaleidoscope, shares why you should become an IIDA member. IIDA is made of creatives, leaders, and changemakers, and together we connect, inspire, and empower. Most importantly: We Make Space — physical... 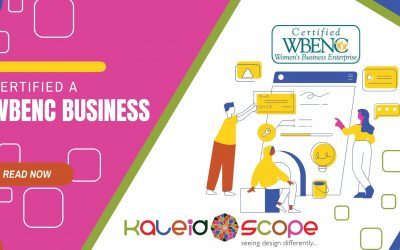 We speak with the VP of Advocacy, and Co-Chair of DEI for IIDA Southern California  A message from our founder. Since working in my career for over 26 years, I have always had extra respect for businesses with the WBENC certification. And now, it held value to... 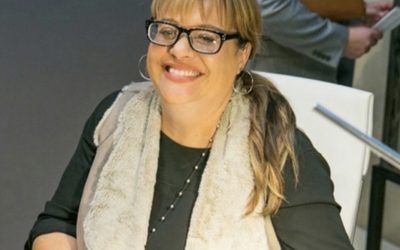